Keep up with BidWrite news and views. 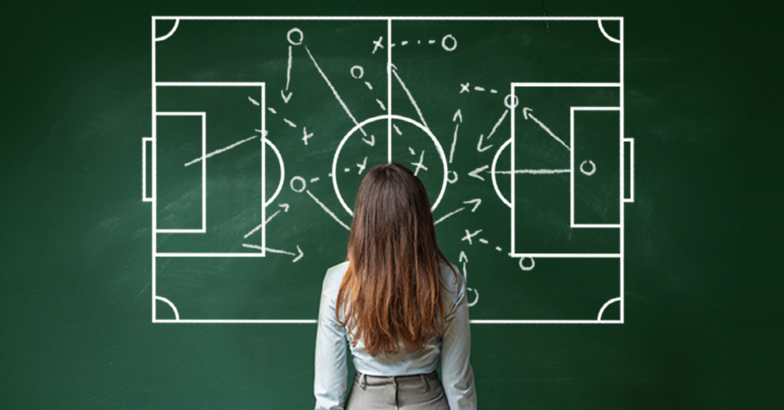 From the age of six I have played soccer in one form or another: school sport, mixed club, women’s district and even a few stints representing my hometown. While I am by no means a Matilda-in-the-making, I know enough to recognise the hallmarks of a well-played game and a convincing win.

But what has soccer got to do with bidding?

Well picture this… you’ve got:

In the soccer scenario, any player’s first thought would be ‘What options do I have?’. Unless you’re a Lionel Messi or Cristiano Ronaldo, the only practical way to get past three players is to pass and move. This does not mean you are giving up. Rather, it is an opportunity to receive the ball again when you’re in a better position, in this case closer to the goal.

As it happens, the pass and move principle applies equally well to the submission scenario.

On a recent bid I found myself struggling to progress a key schedule. It seemed that the more I looked at it, the less sure I became about how to approach it. Recognising my predicament, a colleague supplied me with a fresh perspective: “Move on and come back to it later.”

Don’t get bogged down eating frogs

Although favouring the easy goes against every work ethic lesson I’ve been taught, this proved to be fantastic advice.

Earlier in my career I would have agreed with Mark Twain who famously once said, “If you eat a frog first thing in the morning, this will probably be the worst thing you do all day”. In other words, if you complete the most challenging task first, the rest of your day can only get easier.

While I don’t want to dismiss the value of perseverance, as a bid writer I’ve experienced time and again that when I find myself stuck, moving on is better for the overall bid. This comes with accepting that you will have to eat the frog eventually. But this acceptance lets you move past your angst at the task, while subconsciously developing strategies to make it more palatable.

My colleague explained it best:

“By checking off the easier things, you maximise the finite time you get to spend working on a bid. You can make progress and let the challenging issues stew until you come up with a solution.”

This can mean the difference between working until midnight for the three days leading up to the due date, or maximising your work hours, alleviating a lot of stress and saving your client money. As a bid writer, recognising when you’re cornered and knowing when to break the inertia of a challenging situation by passing (albeit temporarily), moving on and making progress elsewhere is a strength, not a weakness.

I never thought I would seriously consider the connections between soccer and bidding. But when it struck me that in 18 years of playing soccer there has never been a time when a coach has encouraged stagnation, I realised that the same applies to bidding.

Not moving, fixating on the problem and remaining stuck has never been a recipe for success. More importantly, it detracts from what’s at stake. If in my recent submission stalemate I had continued to stare at the troublesome schedule, I would have inevitably done two things – neglected the other schedules to the detriment of the whole bid, and made myself more frustrated.

And while Twain argues for tackling the hardest things first, there is equal merit in assessing the tasks at hand, recognising the sticking points and employing a dynamic pass and move approach to getting the bid completed.

In truth, I didn’t expect soccer and bidding to have so much in common, and I’m not entirely sure how frogs entered the picture. But life can be complicated. My only hope is that I don’t start trying to draft a cover letter during a grand final.

BACK TO ALL BLOGS>

Privacy: Email addresses are never sold or distributed to a third party. The mailing list is password-protected and is only used for sending announcements from BidWrite. No spam, no discussions.